Culture is the sum of collective attitudes, values, norms, traditions, precedents, and past practices that exist in relationships. It is the most powerful force available to help or hinder candor. Culture influences performance standards, how people communicate, make decisions, seek innovation, and address conflict–all of the components that are critical to success.

Relationships are the connecting link between individuals that shape the culture that defines how people think and behave. When a culture is based on trust and respect, a healthy flow of ideas, energy, and support travels back and forth, creating synergy, leading to breakthroughs, and adding value on a regular basis.

Because the forces of culture operate outside the awareness of most people, they are the “hidden” forces that, if not understood and managed, can threaten to defeat even the most well-intentioned efforts. You can consider this arena of culture as a “The Power Zone” because it includes core values that drive individual behaviors, group/team norms, and culture.

These forces of culture are hidden for the following reasons:

The dynamics of culture exist 24/7 and hold a powerful influence on individual behavior and norms. Bold cultural change efforts call on people to harness the natural forces of culture around standards of excellence.

If you think you are above the influence of culture, you are very wrong. Recent books by Malcomn Gladwell and Atul Gawande, both best selling authors and staff writers for New Yorker Magazine, make dramatic points about how we perceive culture. In “Outliers,” Gladwell points out that we deny the influence of culture when considering outstanding performers like Bill Gates and the Beatles.

And the denial is deliberate and stubborn! “We cling to the idea that success is a simple function of individual merit and that the world in which we grow up and the rules we choose to write as a society don’t matter at all.”[1]

How did they do it? The airline industry created a system of checklists, error reporting, and standards for candor in the cockpit, and rigorous training.

Another example of the power of culture is found in Malcolm Gladwell’s book “Outliers.” Gladwell describes the transformation of Korean Airlines flight crew culture away from a culture of deference and into a culture of candor. “Their problem was that they were trapped in roles dictated by the heavy weight of their country’s cultural legacy.” In short, David Greenburg, says, “We took them out of their culture and re-normed them.” The results? They’ve been a great success. They all changed their styles. They take initiative. They pull their share of the load. They don’t wait for someone to direct them. These are senior people, in their fifties, with a long history in one context, which have been re-trained and are now successful doing their job in Western cockpit.[2]

Still, we the public, persist in thinking of pilots as solitary, elite leaders. On January 14, 2009 US Airways Flight 1549 was forced to crash-land in the icy Hudson River in New York, saving the lives of all 155 people on board. The National Transportation and Safety Board said the landing was the “most successful ditching in aviation history.” The press called it the Miracle on the Hudson.

It was as if we simply could not process the full reality of what had been required to save the people on that plane, the same way we don’t see how outliers are a product of the cultures in which they grow up.

This worldwide reaction sends a strong message about how deeply ingrained individualism is in Western cultures.

Another complication that exists to prevent accurate self-assessment is self-deception. Self deception is a natural human behavior in which we see our own behaviors in terms of our (usually good) intentions. On the other side of that, others see only our actions, and the two views can be very different! 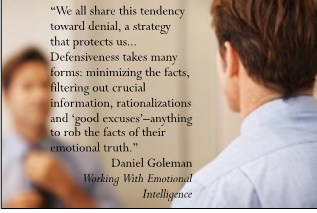 People naturally want to be productive members of society and make a meaningful contribution in relationships. This is why I can look back now and see how my angry burst came across to my brother, and how his girlfriend was doing right by him, and how the president did her most sincere best to run the company. Unless we have one of those wonderful relationships that has candor, the intended and the reality of our actions can cause a lot of negative emotions like fear, anger, resentment, self-righteousness, to name a few.

Self-deception is prevalent and stubborn! The only way to over some it is to constantly compare your behaviors to those you consider ideal, and engage in two-way critique with others in your relationships. Asking for and receiving honest feedback is a fundamental feature. This is easier said than done-you have to be sincere about wanting to know from people and willing to accept other views with grace, regardless of how far apart from your intentions those views may be. If the relationship is characterized by trust, respect, and candor, then you’ll most likely get what you’re looking for. If not, you may well hear something people want they think you want to hear, or they may tell you something negative for other reasons.

“Values are deeply held views of what we find worthwhile. They come from many sources: parents, religion, schools, peers, people we admire, and culture. Many go back to childhood; we take on others as adults. As will all mental models, there is distinction between our ‘espoused’ values–which we profess to believe in–and our ‘values in action,’ which actually guide our behavior. These latter values are coded into our brains at such a fundamental level that we can’t easily see them. We rarely bring them to the surface or question them. That’s why they create dissonance for us.[3]”

In other words, in addition to the ready-fire-aim approach of self-deception, we are often blind to the underlying reasons for our behavior. We see our intentions or espoused behaviors-those we want to use, while others see our actual behaviors. Research shows that in more than 80 percent of the time our intended and actual behaviors do not align [4]. It’s like looking into a carnival mirror that distorts our self-view. And, because the behaviors are tied to our core values, we take them personally and often reject or dismiss constructive evaluation out of hand. This makes it difficult for others to confront unsound behavior without creating tension or conflict.

The good news is that research shows that people universally agree on what a sound relationship looks like. This universality provides a powerful and unifying force for relationships. Awareness of this connecting force creates a positive tension to improve our behavior and our relationships. Because we all want to do our best, clarifying a shared understanding of soundest helps us see “actual” conditions with more accuracy. People who see soundest are not only pulled toward changing things to what they should be, but the experience a heightened sense of repulsion with the status quo.[5]

[4] Culture Development Norms for more than 5,000 participants in a 10 year period.