A Strategy for Changing Norms

The key to changing norms is to shine a bright light on them. Allow those controlled by them to study them and explore alternatives that might better serve “What’s right” objectives. When the norm is shifted, altered attitudes and behavior shifts emerge. Norm-setting strategies are most acceptable when they are consistent with other organization-wide efforts to pursue corporate excellence.

There are benefits to gaining an understanding of group dynamics to motivate sustainable and resilient culture change:

A chaos of conflicting, reluctant, and confused responses develop every time a change is introduced. This chaos provides the leader with a critical opportunity to influence change, because within the confusion lie valuable energy and emotion. The formidable forces of conformity, cohesion and convergence can be used to create order out of chaos and shift opinions around new group norms—hopefully ones that are collectively and passionately pursued.

Norms and standards can easily manage behavior. However, through awareness, the process can reverse. People can manage norms and standards and, by doing so, harness the power to change. Companies that succeed in staying on the cutting edge of competition all have one thing in common: there are no sacred cows. They question everything and constantly challenge norms so that complacency never sets in. 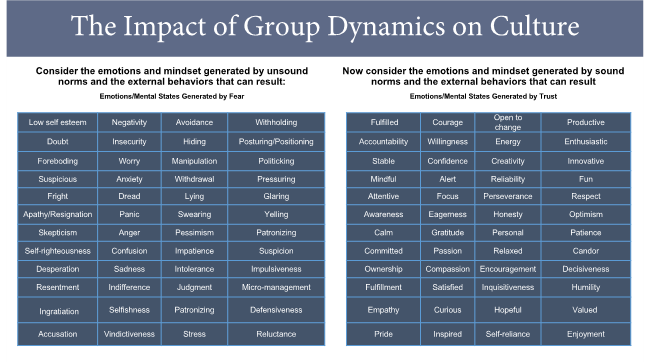 If you think you are above the influence of culture, you are very wrong. Recent books by Malcomn Gladwell and Atul Gawande, both best-selling authors and staff writers for New Yorker Magazine, make dramatic points about how we perceive culture. In “Outliers,” Gladwell points out that we deny the influence of culture when considering outstanding performers like Bill Gates and the Beatles.

“We took them out of their culture and re-normed them”

Another example of the power of culture is found in Malcolm Gladwell’s book “Outliers.” Gladwell describes the transformation of Korean Airlines flight crew culture away from a culture of deference and into a culture of candor. “Their problem was that they were trapped in roles dictated by the heavy weight of their country’s cultural legacy.” In short, David Greenburg, says, “We took them out of their culture and re-normed them.” The results? They’ve been a great success. They all changed their styles. They take initiative. They pull their share of the load. They don’t wait for someone to direct them. These are senior people in their fifties with a long history in one context, which have been re-trained and are now successful doing their job in Western cockpit. (Page 220)

Still, we the public, persist in thinking of pilots as solitary, elite leaders. On January 14, 2009, US Airways Flight 1549 was forced to crash-land in the icy Hudson River in New York, saving the lives of all 155 people on board. The National Transportation and Safety Board said the landing was the “most successful ditching in aviation history.” The press called it the Miracle on the Hudson.

It was as if we simply could not process the full reality of what had been required to save the people on that plane, the same way we don’t see how outliers are a product of the cultures in which they grow up. This worldwide reaction sends a strong message about how deeply ingrained individualism is in Western cultures.